Environment Design: How To Improve Your Health And Productivity Without Thinking About It. Making changes can be difficult. It’s hard to get motivated to do something over and over again — even if you know that it’s good for you.

But what if I told you there was a different option? Something that didn’t require an ounce of motivation.

Eric Johnson is a researcher at Columbia University, and Daniel Goldstein is a researcher at the London Business School. Together, they conducted a surprising study that revealed just how much your environment impacts your behavior — often without you even realizing it.

Here is what they discovered…

The researchers collected data from 11 countries in Europe. The data showed the percentage of people in each country who had selected to be an organ donor. 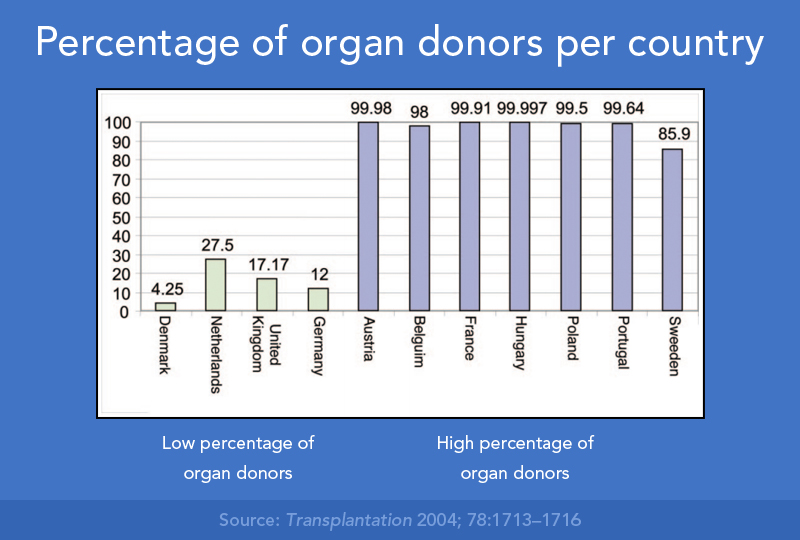 When the researchers looked at this graph, it was somewhat confusing. Initially, they thought the difference in donations would be caused by factors like religion and culture, but that wasn’t the case.

For example, Denmark and Sweden are located right next to one another. They have many geographic, cultural, and social similarities. You would expect their donation rates to be roughly the same.

What Made the Difference

The difference in donation rates was due to the type of form that each country sent out. The countries with low rates of organ donors sent out a form that said, “If you want to be an organ donor, check here.” In other words, the form required people to opt in.

Meanwhile, the countries with high rates of donation sent out a form that said, “If you don’t want to be an organ donor, check here.” In other words, the form required people to opt out.

The difference was astounding. 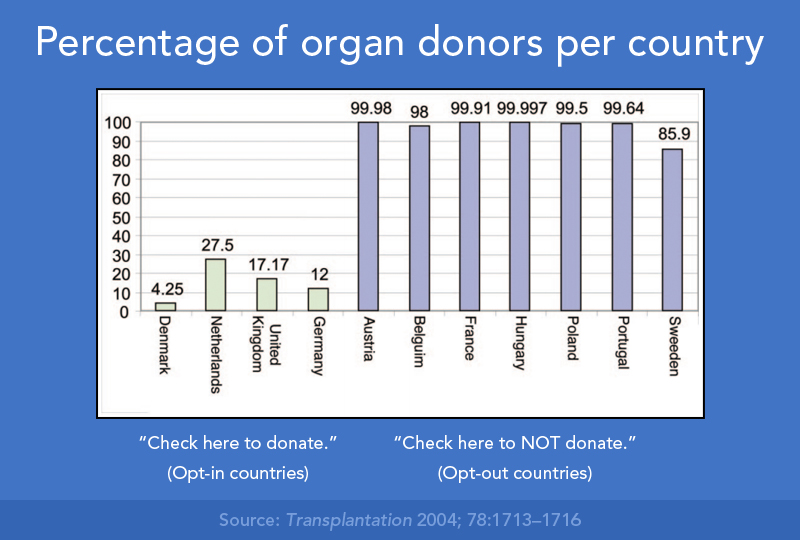 Here’s why this is important…

If someone asked why or why not you chose to be an organ donor, you would probably come up with an important reason for your answer. After all, being an organ donor seems like a very personal decision.

But the truth is, whether or not you chose to be an organ donor had more to do with the type of form you were sent than anything else.

Consider the impact of this. If a simple form can make such a drastic difference in your choices, how do other pieces of your environment impact you on a daily basis?

What is going on here? And how can you use it to improve your life?

How Your Environment Impacts Your Behavior

The researchers summarized the impact of the environment by saying, “In most cases, the majority of people choose the default option to which they were assigned.”

In other words, most of us respond the same way to the cues that surround us.

You may think that you control most of your choices, but the truth is that a large portion of your actions every day are simply a response to the environment around you.

The forms you are mailed, the food on your kitchen counter, the items on your desk at work — they all impact your behavior in one way or another.

Bringing it back to the researcher’s quote, we could say that your environment is the “default option to which you are assigned.” The environment you surround yourself with determines the default actions that you take on a day-to-day basis.

Guess what? This is good news because you can design your environment for success.

How to Design Your Environment for Success

By changing your surroundings, you can place a hurdle in the way of bad behaviors, and remove the barriers to good ones. I like to refer to this strategy as environment design.

Here’s an easy way to apply environment design to your own life: think about your environment in relation to the number of steps it takes to perform a habit.

Here are some examples…

Eat more vegetables. Buy dark green plates and you will automatically serve yourself 30% more when you eat foods that are dark green in color (like spinach, broccoli, and leafy greens).

Reduce mindless eating. I don’t know about you, but if I see a cookie sitting on the kitchen counter, then I’m going to eat it. I don’t even need to be hungry. It’s just there, so I respond. I’m simply reacting to my environment.

Make life easier on yourself by removing unhealthy food from your view. Put healthier options like fruit and nuts on the kitchen counter.

Turn on the TV less often. Pick up your remote and put it in a drawer, a closet, or somewhere out of sight. Where your remote used to be, put a book.

If you want to watch TV — not just when you’re bored, but when there is actually a show on that want to see — you can walk up to the TV and turn it on. This also prevents mindless channel surfing, and makes it more likely that you’ll pick up a book instead of the remote control.

Another TV stopper. Watching TV is a perfect example of responding to your environment. If you walk into any living room in America, where are all of the couches and chairs facing? Directly toward the TV.

The screen is the first thing you see when you sit down, no wonder you turn it on when you’re bored. Turn the couches and chairs in your living room, so that they don’t all face the TV. You’ll watch less TV and, I hope, read more, talk more, or move more.

If you’re really bold, unplug the TV and put it in a closet for the next week. Give that a try, and you’ll begin to notice how your environment impacts your behavior.

Work out more frequently. When you get home from a long day of work, or when you’re tucked into a warm bed in the morning, it doesn’t take much of an obstacle to keep you from working out. You can remove one hurdle in your environment by laying out your workout clothes the night before.

When your shoes, water bottle and gear are ready and waiting for you, there is one less hurdle between you and a good workout.

Start flossing. I floss everyday, but it wasn’t always that way. Previously, I never remembered to take the floss out of the drawer and use it. Then, I bought a small bowl, dropped a handful of pre-made flossers in it, and set it next to my toothbrush.

That simple change in my environment was all I needed to start flossing consistently. What small visual cues can you make for yourself?

Environment Design: Where to Go From Here

Most of the time we assume that to take a certain action, we need to have an incentive. You hear people say this all the time: “I need to get motivated” or “I need to have a good reason for doing X.”

We also assume this same approach for managing and motivating others. Managers and leaders will often assume that they need to incentivize their employees, teammates, or students to take a particular action.

It’s easy to imagine the countries in the organ donation study sending out an educational mailing to motivate their citizens to donate or offering an incentive to the people who chose to become organ donors.

Environment design paints a different picture. It proves that our choices and preferences can be crafted by the environment around us. Suddenly, it becomes apparent that we don’t need to be motivated or incentivized to take action — we simply need to be surrounded by the right cues.

Imagine if your world — your home, your office, your gym, all of it — was crafted in a way that made the good behaviors easier and the bad behaviors harder. How often would you make healthy and productive choices if they were simply your default response to your environment?

And how much easier would that be than trying to motivate yourself all of the time?

Most of the time, you don’t actively choose the environment that surrounds you, but it doesn’t have to be that way.

How is your environment impacting your choices? And what will you do to improve it?